On the weekend we had the opportunity for an afternoon at Kubbar Island with our good friends George and Michelle Lambross and our boys.

The wind had abated the day before, so weather conditions were near perfect departing from Marina Crescent. As always, we kept an eye out for birds on route with the odd Lesser Crested Tern and a few large White-headed Gulls seen.

However, the highlight of the trip was coming across a pod of between 20 - 25 Indo-Pacific Bottlenose Dolphins (a first for me in Kuwait), halfway to Kubbar. We stopped the boat and enjoyed their company as the swam around the boat for almost 20-minutes.

From Wikipedia it states that up until 1998, all Bottlenose Dolpins were considered members of the single species T.truncatus. In that year, the Indo-Pacific Bottlenose Dolphin (Tursiops aduncus) was recognised as a separate species. T. aduncus is generally smaller than T.truncatus, has a propotionally longer rostrum and has spots on its belly and lower sides (whch we didnt see).

Here are a selection of images from this enjoyable encounter. 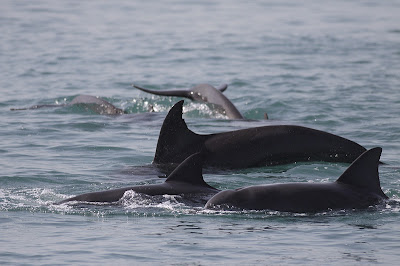 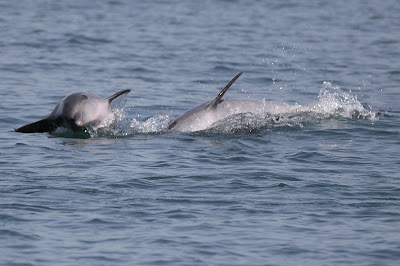 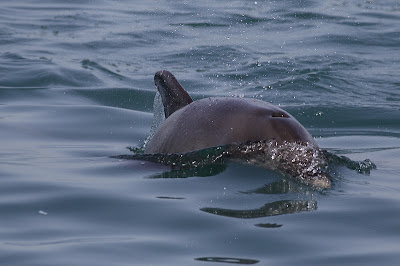 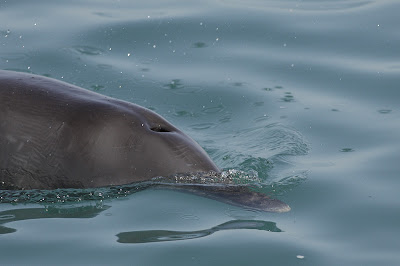 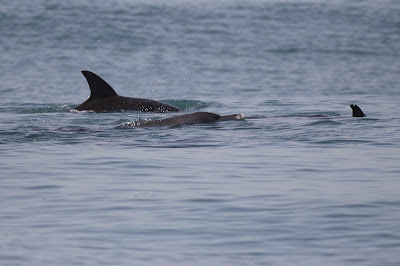 After a relaxing afternoon snorkelling and relaxing at Kubbar, we enjoyed the tranquil sunset on the return to Marina Crescent 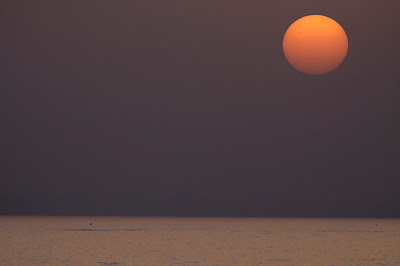 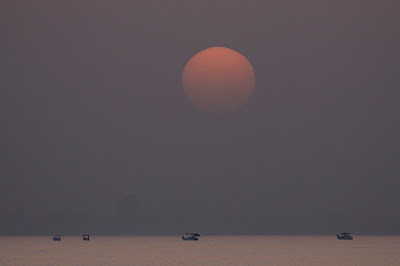 This morning I was able to get to the roost site earlier than 2-days back. Although numbers were down, most of the Raptors had roosted in the trees on the farm in Khuwaisat and not many were seen on the desert.

Just before the farm, I found an obliging Short-toed Eagle with it's characteristic large yellow eyes and round head sitting on a telephone line.

By now the roost had taken off and were starting to thermal, as with previous days the majority were Steppe Buzzards 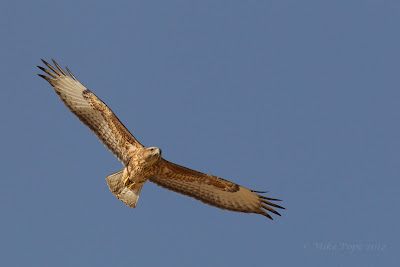 But I picked up a bigger and darker bird amongst the flock which was a sub-adult or 1cy Egyptian Vulture, one of four that were seen this morning 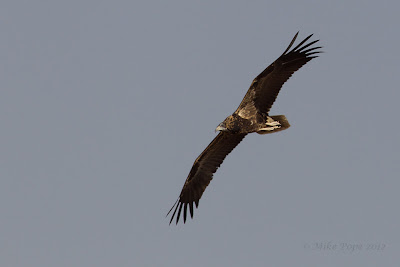 As the flock(s) dispersed after thermaling updward, I again headed to SAANR, picking up a single Steppe Eagle on the way.

At Tuhla inside the reserve, there were no raptors, But a patient wait produced a few Steppe Buzzards, one a dark morph adult that looks very different to all the other variants. 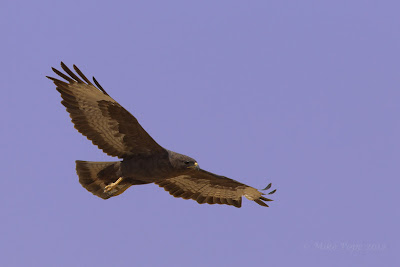 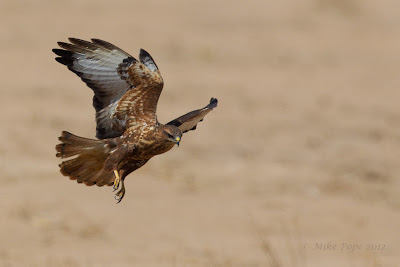 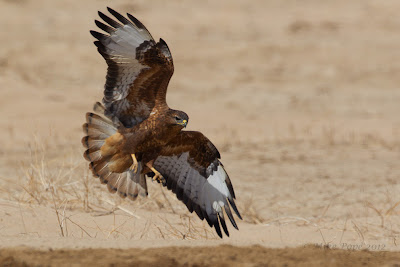 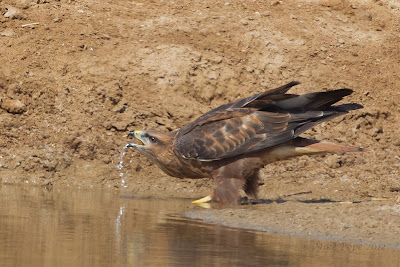 A Pallid Harrier put in a brief appearance 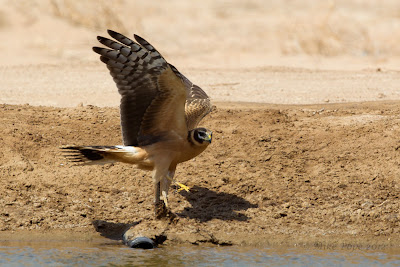 But a large Steppe Eagle gliding low overhead put up most of the birds - it really is intimidating close-up.

Whilst waiting for more raptors to appear (which they didnt), a Yellow Wagtail posed for a picture.

On the weekend (14/09) we had strong winds and dust from the NW and this brought in really big numbers of Raptors. Birders who were able to get out early in the week reported in excess of 2,000 Raptors, made up mostly of Steppe Buzzards in a variety of plumage variations, but also many Honey Buzzards and a few Crested Honey Buzzards.

I was able to get out early one day in the week to finally witness this amazing spectacle for myself as the birds departed from their overnight roost and started thermalling in small kettles, slowly disappearing from site.

A few images of some of the Steppe Buzzards follow.... 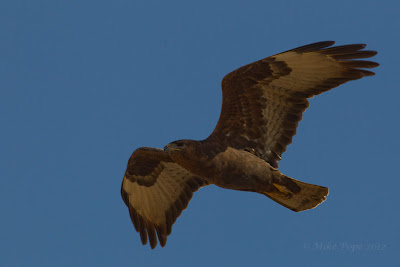 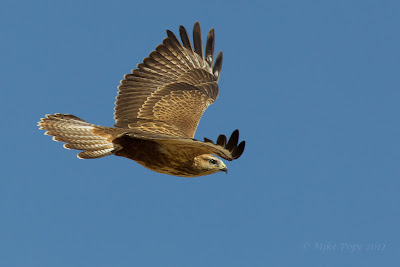 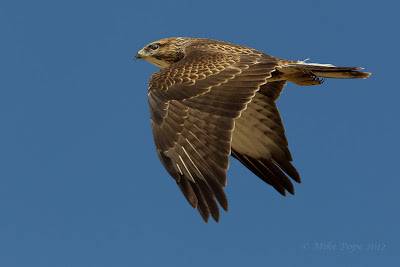 A lone 1cy Black Kite stood out from the thermalling flock

Once the majority had moved off, I went off to SAANR - just after the ridge, I came across a Steppe Eagle patiently watching a Marsh Harrier devour the remains of a Spiny-tailed Lizard.

Once I got to Tuhla, I joined many of the other birders patiently waiting for birds to stop over for a drink before continuing on their migration. Again, most were Steppe Buzzards. 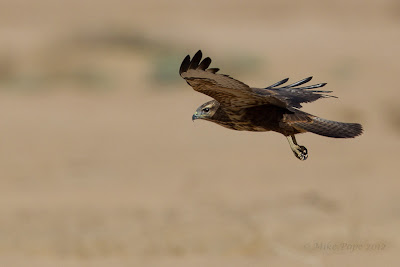 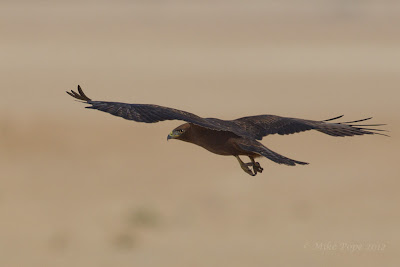 Just after I left, Khaled Al Nasrallah called me to say a juvenile Honey Buzzard had stopped for a drink, so I finally ticked this species on my Kuwait list, but was unable to get an image. On the way back to the main gate, a pale phase Booted Eagle came by quite low on its way to Tuhla

Earlier in the week a few kettles (40 and then 20 birds) of European Honey Buzzards were seen migrating through SAANR and JPR. So,  I spent a few hours on each day at JPR with a few of the other local birders hoping for ideal conditions and to see the passing raptors.

Wind was pretty strong today and so minimised the chance of Raptors stopping for a drink and they didn't. We had to contend with watching some of the waders like; Little Stint

quite a few juvenile birds were seen, namely Dunlin

I again returned to JPR for a few hours from 7:30 - 10am and again the winds were not as favourable as they should be. In terms of raptors, only the Marsh Harrier was seen harassing birds as it flew low over the reeds. More of the same species seen yesterday in terms of waders, but some more exciting species too like a Common Greenshank (that I hadn't seen at JPR yet)

Alongside a Marsh Sandpiper for comparison

However, more exciting was a distant single Broad-billed Sandpiper (which I had seen the week before, but there were no photo opportunities)

and a skulking Little Crake

Garganey were still present on some pools

And in a flying flock, a Northern Shoveller was also seen

Along roads I had Isabelline Wheatear

and my first Pied Wheatear for this autumn

But what I enjoyed the most was a pair of Little Grebes feeding their 4 young chicks on worms they were diving for an plucking off the base of reeds - it was quite a special occasion watching the parents tend to the hunger needs of their brood - I hope you enjoy the images.. 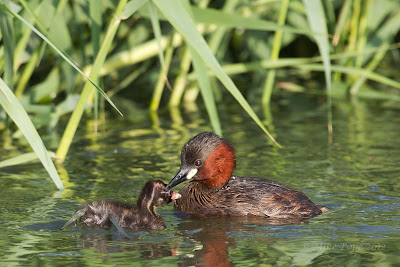 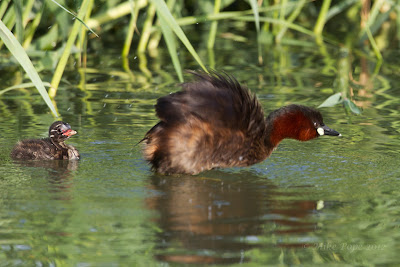 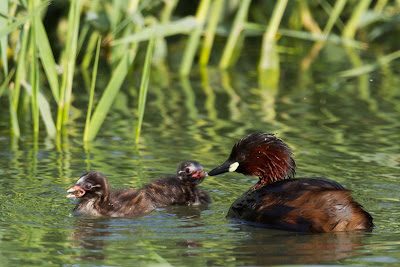 Session # 3
This time the weather appeared perfect and Gill and Jaden joined me for a enjoyable morning at JPR, again with many of the local birders (Khaled, Mohammad, Mahmoud, Aziz). While waiting for the ideal time (8:30 - 10) we explored the reserve with me showing my wife and son some of the more common species. I had let me son Jaden use my 50D and 400mm and he got good images of Common Snipe

and later a creative image of a Common Moorhen

And a wounded Terek Sandpiper, also not a common species in this reserve - but obviously with all the water conditions are attracting many more species than usual.

Again the Little Grebes were seen close by feeding their chicks 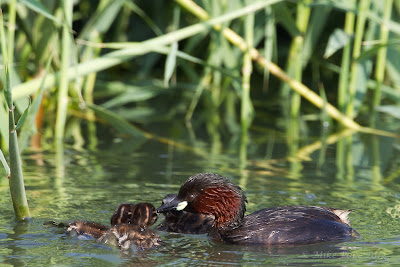 In terms of raptors today there were two Western Marsh Harriers 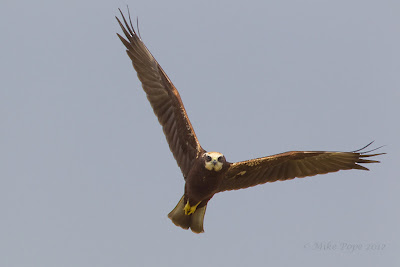 and we did see a few others namely; Egyptian Vulture, Long-legged Buzzard, Montague Harrier, Steppe Eagle, but all were too distant for photographs. A Western Osprey came over the hide and finally landed in a distant pool. Gill and I drove around the reserve to the pool and found it drinking. We approached slowly and since the Osprey was on Gill's side I passed her the hefty Beast (600mm) and she managed to photograph from a distance the bird in the water. When it finally flew, Gill was able to track and get off a few fantastic images as it flew toward us. 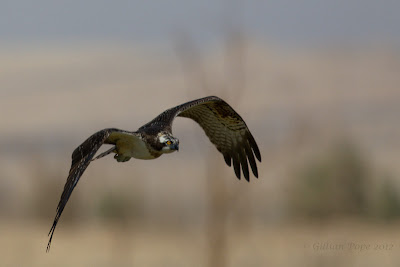 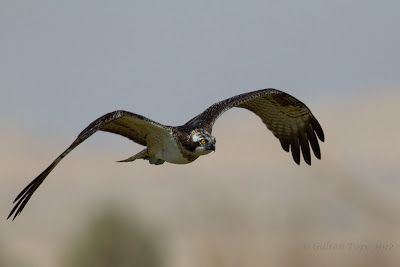 I then turned the car around to go back to the hide only to have the bird fly by on my side, so I too managed to squeeze off volley at 10fps. These actually turned out to be the best images I have of Osprey so far, so we were both very pleased.

In the same pool, many White-winged Terns were seen hawking and feeding off the water

No other raptors were seen from the hide, but a tatty Blue-cheeked Bee-eater came in to perch on the old tree in the pool. 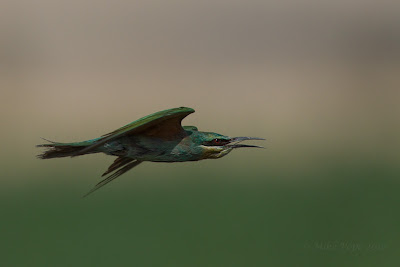 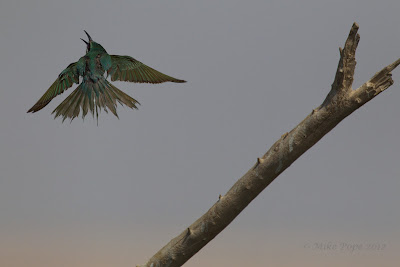 We then called it a morning, said our goodbyes and photographed this Black-tailed Godwit on the way to the gate