We had a perfect clear and calm morning and I needed to get out of the apartment as options were limited, I headed to Jahra Pools hoping to see one new species and get better views of another.

I headed to the area where I had previously glimpsed Afghan Babbler, but after some patient waiting had no luck, nearby however I did find a cracking male Little Crake skulking around the reed base of one of the smaller pools.

I enjoyed a male Graceful Prinia singing and displaying his heart with lots of tail wagging and posturing in an attempt to attract a seemingly disinterested female. 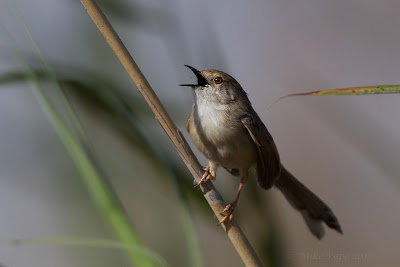 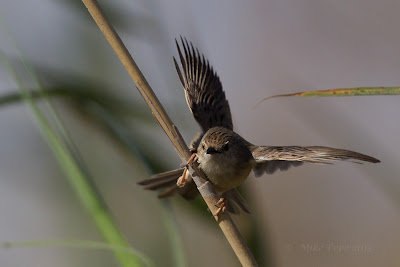 Checking the bigger pool I noted a mixed flock of Ducks, consisting of Gadwall, Mallard and Shoveler but they were too far off for an image. A slow drive to the bigger and more open western pool produced a number of Common Chiffchaff

followed by an obliging Common Kingfisher..

A Harrier flushed a few ducks from this pool and I was able to get a grab image of a pair of Ferruginous Ducks (10th record for Kuwait) flying overhead.

There were good numbers of young Green Toad's (not more than `1.5 cm in length) hopping around on the road and around the reeds

Whilst driving slowly around on a 2nd loop, I was talking to my late Dad as if he was sitting in the passenger seat next to me and comparing the Pied Crow I used to have as a pet growing up to the Mesopotamiam Crow that has been seen at JPR on a number of occasions - when all of a sudden, a shadow passed over my car and I got a brief glimpse of the Crow flying over. It landed in some distant trees and I was able to get a distant view before it dropped into the cover of the tree. Not much later it came flying out with something in it's beak and landed on a mound a little closer this time, but into the sun. It seemed to be a young bird (sparrow) that it had perhaps pulled out of a nest in the tree. These are just record images and I hope to get better images if I can get closer next time. 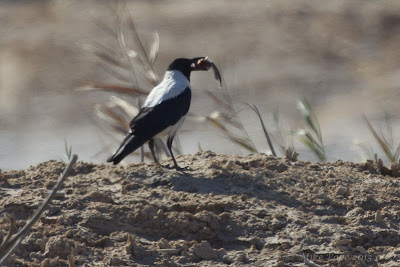 Thanks Dad and I continued driving to the Babbler location, again without luck. There was a rather large explosion from where the workers were working on the trench for the pipeline that put up many birds, including 4 White-tailed Lapwings.

I found where they had landed and just as I was watching them, a single Western Cattle Egret landed in front of me and this bird is synonymous with my late dad and was his way of confirming that he was with me this morning when I was talking to him.

I really felt great and thought it was a good time to leave, but stopped to chat to Khaled Al Ghanem at the gate of the reserve. We had just started chatting when I saw out of the corner of my eye the Afghan Babbler drop off the roof of the office into some shrubs - we both grabbed our camera's and enjoyed the next 15-minutes having this amazing bird hopping about 5m in front of us....we couldn't have asked for better views of what is a relatively difficult bird to see up close. 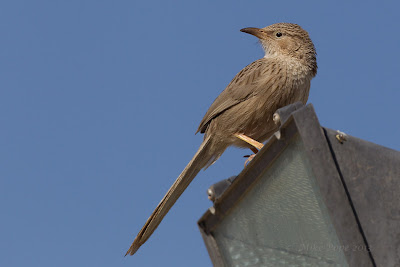 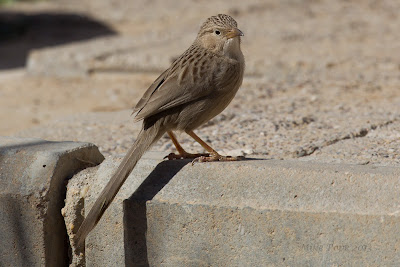 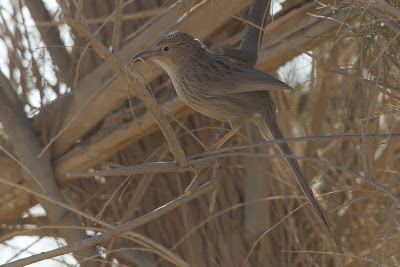 While we were watching the Babbler, a Libyan Jird popped out of it's burrow amongst some flowers. Abdulrahman confirmed that it is Libyan Jird as it is the only species with dark claws. The dark colouring and banding threw me off a little, but we concluded it may be moulting.

Before heading home, I popped into Jahra Farms to check for early spring arrivals, but instead found a single male Hypocolius feeding quietly and quite cryptically on what appeared to be the last date palm with any dates left.

Today turned out to be quite spiritual morning and with some great birds seen, so I drove home with a warm feeling in my heart.

Whilst my son was having his golf lesson on the simulator at Sahara due to inclement weather, I had a quick stroll around the 18th hole.

At this time of year, there are still many White Wagtails around though the majority are still in winter plumage. On the 18th there were two Wagtails, this one in  typical winter plumage

and another almost in full breeding plumage

Posted by Birding Kuwait at 17:14 No comments:

A morning in the South

I spent a morning down at Sabah Al Ahmad Sea City in the oldest part of the project exploring the pristine lagoons and each of the 4 small islands.

Interestingly, very few passerines were seen, but I did photograph a few of the many large Dragonflies seen on the islands. I believe this is the male, but not sure of the species - however one of my readers has suggested that it could be Vagrant Emperor (Anax ephippiger), so I will go with this identification.


And this is the female of the same species.


In the shallow water just off one of the islands beaches, I came across a massive shoal of small fish that should have been a smorgesbrod for the few Grey and Western Reef Herons that were about...but strangely, no birds were taking advantage of this easy meal. I quite liked the symmetry in this image


Swimming against the flow


I quick trip off shore gave a single Caspian Gull


And a few of the expected Great Cormorants with some males now in full breeding plumage.


After the boat, I explored some desert areas finding two early Spring arrivals in the form of a distant Marsh Sandpiper


and a few Ruff against the light

Andy and Nicola Hulet had notified me of a possible Ashy Drongo that they saw at Fahaheel Park. Later they were able to get a distant image that clearly showed the long forked tail of a Drongo.

I visited the Park yesterday to see if I could relocate the bird, but without success probably because the park had quite a lot of pedestrian traffic. This morning I was back much earlier and relocated the bird as it aggressively chased some of the resident species around the Park near the MacDonalds. 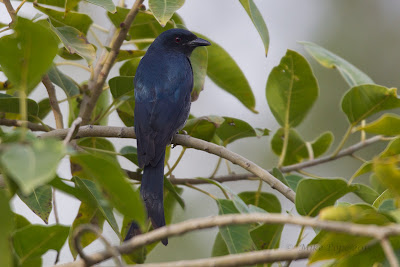 This will be the 3rd record for Kuwait if accepted by KORC, the 2nd record was one of two birds recorded at Jahra Farms on 7th December 2010.

Of interest an early Masked Shrike was also seen 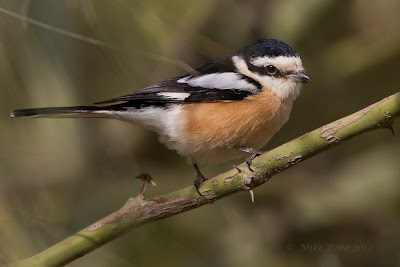 A male Ruppells Weaver in full breeding plumage, possibly coming from the breeding pair at Green Island was in full cry, but was not co-operative to have his picture taken?
Posted by Birding Kuwait at 11:22 1 comment:

Mr and Mrs Rüppell's I presume

I had a spare hour before I needed to attend a meeting, so had a brief walk around Green Island on a gloomy and rather drizzly morning.

There were no dates left on the date palms, so no Hypocolius were seen, although the weather may have also played a role.

I did however find the 'resident' Rüppell's Weavers that have been at this site for almost 2-year now; first the female

and right behind her, the male

The trees were quite barren, so I was able to count the nests the male has made that were still hanging abandoned in the trees - 15 all together. What is interesting, is that it seems it is just this pair present on Green Island - so not sure if fledged juveniles have dispersed or if they have been unsuccessful in breeding?